Ferrari Club of America judging rules dictate that your judging sheet showing your deductions is sent to you a few weeks after the show. Up to this point all we knew is that we had scored 95 points or better to achieve a Platinum Award but did not know how close to 100 we did.

As previously stated 100 points hardly ever happens as judges get infinitely more picky as a car approaches a perfect score. On our end we were never arrogant enough to think we would score 100 either. After all we are just some newbie restorers doing our first Ferrari so we felt that we were bound to make a mistake somewhere along the lines that would be cause for deduction. In addition judging errors do happen so you must also take into account the human fallibility of the volunteers who evaluate the cars. With all this in mind we had set a goal of 98 points or better and worked hard towards that outcome.

Today the judging sheets came in and with it came a pleasant surprise. In the end we scored 99.5 points out of 100. With a half point being the smallest deduction possible we came as close to perfect as the rules allow which is better than we hoped for. 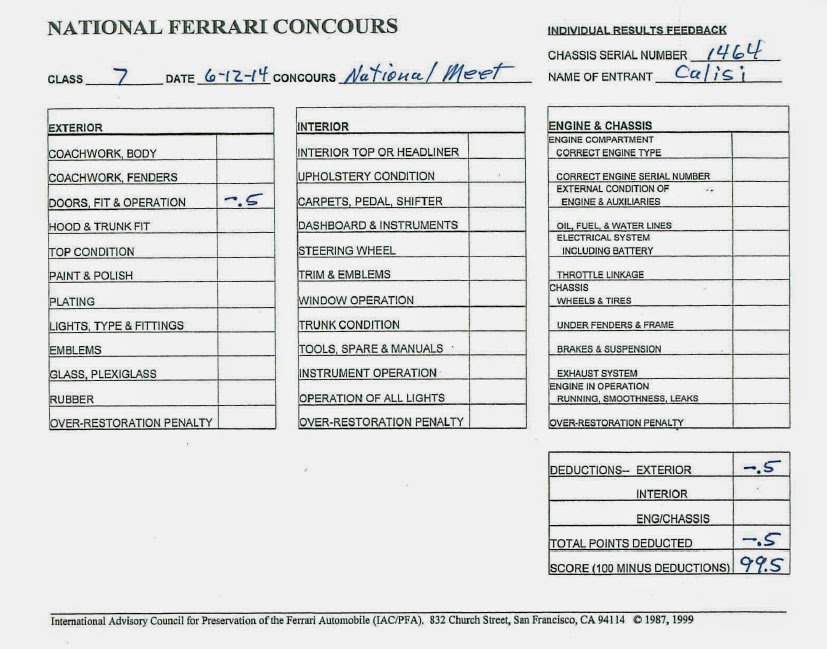 The obvious next question is: Why not 100? and What was the half point deduction for?

The answer to the second question is easier than the first so we will start with the low hanging fruit.

The leading edge of the doors on the Dino have a soft rubber trim on them that tucks under the rear edge of the front fender. When the trim is 100% brand new it takes a while for it to take its final set so from time to time it catches on the fender and sticks up a little. In our case we had our trim fitting well however when it was being loaded onto the truck for delivery it somehow got caught and spent 2 days bent backwards in the hot truck. When we unloaded for our final prep we saw the molding was deformed and did our best to get it set back into its correct position for the show. The extreme heat and humidity did not help our cause but we were able to get it to the point where 8 times out of 10 it would work well with time being the only proper remedy. Come show time the molding stuck ever so slightly when closing the door and we were deducted the half point because of it. With nothing more than a few days to heal itself the molding is now working perfectly again so all we can do is shrug our shoulders and call it one of those things that happen.

That said, we are realistic and believe that had it not been for the sticky molding at that moment  'something' would likely have been found (no car is perfect) as 100 scores are as rare as a 'hole in one' in golf.

99.5 Points at the Ferrari Club National Meet for a Dad and two brothers working in their spare time as total amateurs. We'll take it :)