Having gone through our first 4 posts discussing carb tuning you should now:

1. Have a pretty clear understanding as to the basic operation of your carbs

2. Know the exact procedure required to setup the carbs on your Dino

3. Have an understanding as to how the Low Speed Circuit (LSC) operates and controls the flow of fuel to the engine from just past idle all the way up to about 3000 rpm

With this knowledge we can now proceed to look at the Main or High Speed Circuit (HSC) which governs the flow of fuel to the engine from about 3000 rpm all the way to redline. While there are many parts to the system we will concentrate on the pieces that are most likely to be changed as part of tuning through carburetion. These parts are:

Below are some images illustrating the location of these parts, what they look like assembled, and what they look like apart. We will add that on a stock engine the Emulsion Tube does not really enter into the tuning equation so it is really the Main Jet and Air Corrector that we will focus on. 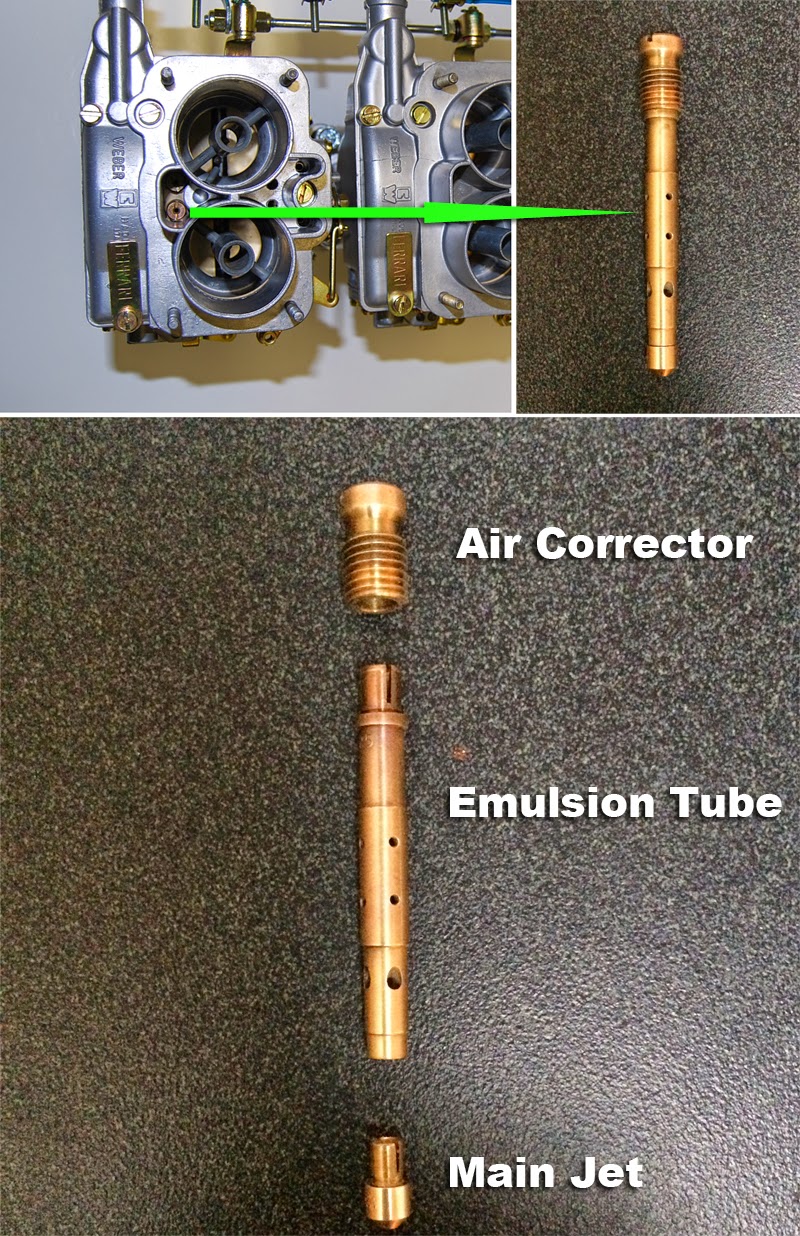 The image below will illustrate how these pieces work in the carburettor at engine speeds over about 3000 rpm.

Note that the vacuum created at higher engine speeds directs fuel away from the LSC to eventually reach a point when only the HSC is supplying fuel. 3000 rpm is not a definitive point where the HSC takes over the LSC. A transition takes place at about 3000 rpm so we use that as a guideline to determine the source of a carburetion problem. Below 3000 rpm look to the idle jet, above 3000 rpm look to the air corrector and main jet. 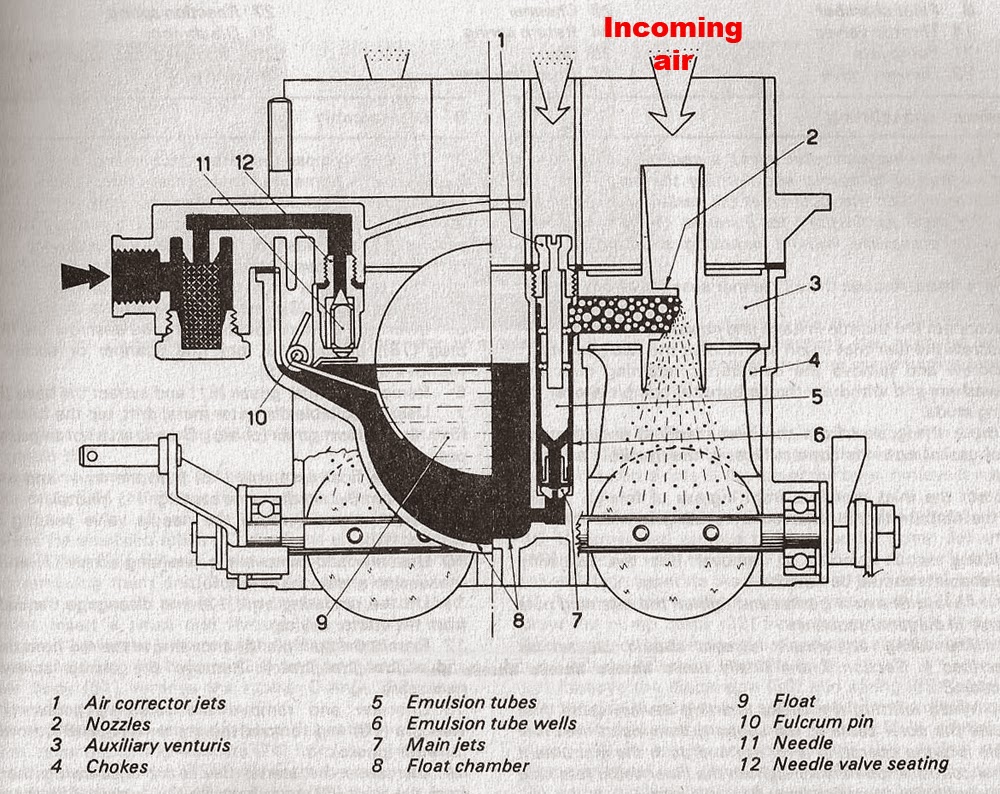 To explain what is happening in the above image, as the engine speed rises to about 3000 rpm and above, the increased flow of air through the throat of the carburettor causes the Venturi #3 to create enough vacuum that it draws fuel from the float chamber #8 and through the Main Jet #7. This fuel is mixed with air whose volume is metered by the Air Corrector #1. The mixing takes place in the Emulsion Tube #5 and the mixed fuel travels to the Venturi #3 where it atomized by the incoming air. The atomized fuel travels down the throat of the carburetor, past the throttle plate, and into the engine for combustion.

1. Increase the Main Jet size to let more fuel in or decrease the size the supply less fuel.

The explanation of the HSC often leads to a basic question:

Why is an idle jet enough to run the engine up to about 3000 rpm while above that speed you need the Air Corrector / Emulsion Tube / Main Jet combination? Why is a Main Jet not enough?

The answer is simple and lies in a basic weakness that makes up a basic carburetor. Because the engine in a car is expected to perform across a wide range of both speed and load its carburetor needs to be able to supply fuel as the engine accelerates and decelerates at a rate consistent with a optimal air/fuel ratio of  about 12.5-16:1. At lower engine speeds the combination of the idle circuit and progression holes that make up the LSC are adequate to keep the air/fuel ratio within the required range and therefore a simple idle jet is all that is needed to meter the fuel.

As the engine increases in speed, the vacuum created in the Venturi starts to draw fuel at a rate that is faster than the increase of air that is coming in. The faster the engine turns the worse the problem becomes as the mixture gets richer and richer with any increase in engine speed. This is called The Mixture Enrichening Phenomenon.

To correct this, the Air Corrector / Emulsion Tube / Main Jet assembly was created. Fuel is metered by the Main Jet (just like the Idle Jet in the LSC) but additional air to correct for the Mixture Enrichening Phenomenon is introduced via the Air Corrector while the Emulsion Tube takes care of mixing the two. This assembly ensures that fuel is supplied to the engine in the HSC at the correct air/fuel ratio regardless of load or engine speed. Super simple yet very clever.

So there it is. The HSC explained and the parts identified to pay attention to when tuning. In our final and perhaps most important installment we will discuss modern fuels and proper jet selection for maximum performance.