At this stage I will re-iterate that the idle mixture screw is for setting the mixture at idle ONLY and not for correcting low speed running problems. We will discuss this in detail later in this post when we cover the basics of the low speed circuit that governs the flow of fuel to the engine from idle to about 3000 rpm

The most accurate way to regulate the idle mixture is to use a CO meter however this is a rather obscure & costly tool that does not make up the tool box of almost any mechanic. There is however a simple procedure that can yield near perfect results using nothing more than your tachometer and some basic powers of observation. 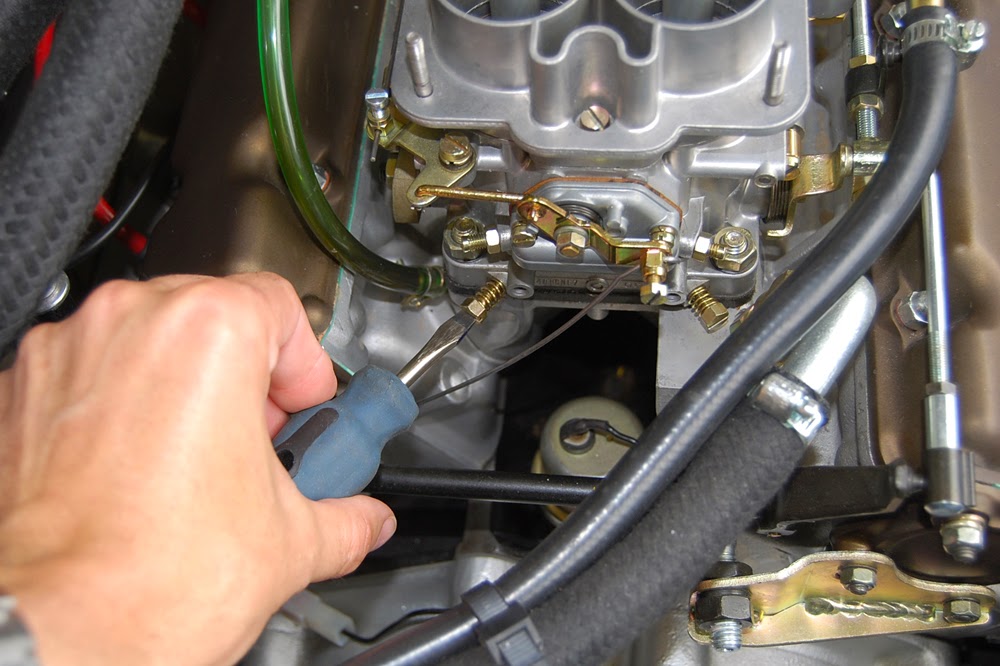 One simple technique to see the effects of a non firing or 'dead' cylinder is to disconnect a spark plug wire while the engine is running. With the engine idling, pull one of the spark plug leads off of the plug and note the change in the behaviour of the engine as well as the drop in RPM registered on your tachometer. Doing this for a few seconds does no damage to anything but will clearly show what the result is of being down a cylinder.

NOTE OF CAUTION: SPARK PLUG LEADS CARRY A LOT OF VOLTAGE. WHEN DISCONNECTING A LEAD ON A RUNNING ENGINE BE SURE TO USE RUBBER GLOVES AND PROPERLY INSULATED PLIERS. ALSO BE SURE TO IMMEDIATELY PULL THE WIRE END FAR FROM THE CONNECTING TERMINAL ON THE SPARK PLUG TO AVOID THE SYSTEM FROM GROUNDING.


Procedure for setting the idle mixture

1. We will assume the carbs are synchronized, the idle speed is set, that each carb is set to a baseline of 2 turns open on each idle mixture screw, & that the engine is up to temperature and running.

2. Using a screwdriver (preferably one with an indicating marking as shown in our previous posts) close the idle mixture screw 1/2 turn at a time allowing a few seconds to observe the result of the change. You will note that at one point the cylinder will cease to fire therefore making the idle speed drop much like what was observed when the spark plug wire was removed.

4. The goal is to set the idle mixture screw to the point where the engine runs fastest just before it begins to slow from being too rich.  Because you were making your adjustments 1/2 turn at a time you are now in a range where the increase of 1/2 turn (the final observation from Step 3) caused the engine to slow.  As such close the idle mixture screw 1/4-1/2 a turn from that point to achieve the optimal mixture.

5. Repeat this process for the other 5 cylinders.

TEST YOUR WORK When you are all done to test your work you can pull one spark plug lead at a time (never running with less than 5 cylinders) and note the number of RPM's the engine looses. You will know things are operating correctly if the engine drops a near equal amount of RPM every time a spark plug is disconnected.

Having varied the mixture at idle, it is likely that the idle speed will have changed. If this happens re-adjust the idle speed as previously outlined checking with your synchrometer that the carbs continue to flow equally. Dino's seem to like an idle speed between 700-900 rpm.

Your carburetors are now set and you are ready to start an on road evaluation of your carburetion.

Before explaining the low speed circuit on the Weber carburetor we need to review some basic points outlined in our previous posts:

2. The idle jet despite its name controls the flow of fuel up to about 3000 rpm in what is known as the 'progression' or 'low speed circuit' (LPC for short)

3. The idle speed screw should not be turned in too much (more than about 1.5 turns) to avoid introducing the LPC during idle.

To best picture what is happening reference the photo below: 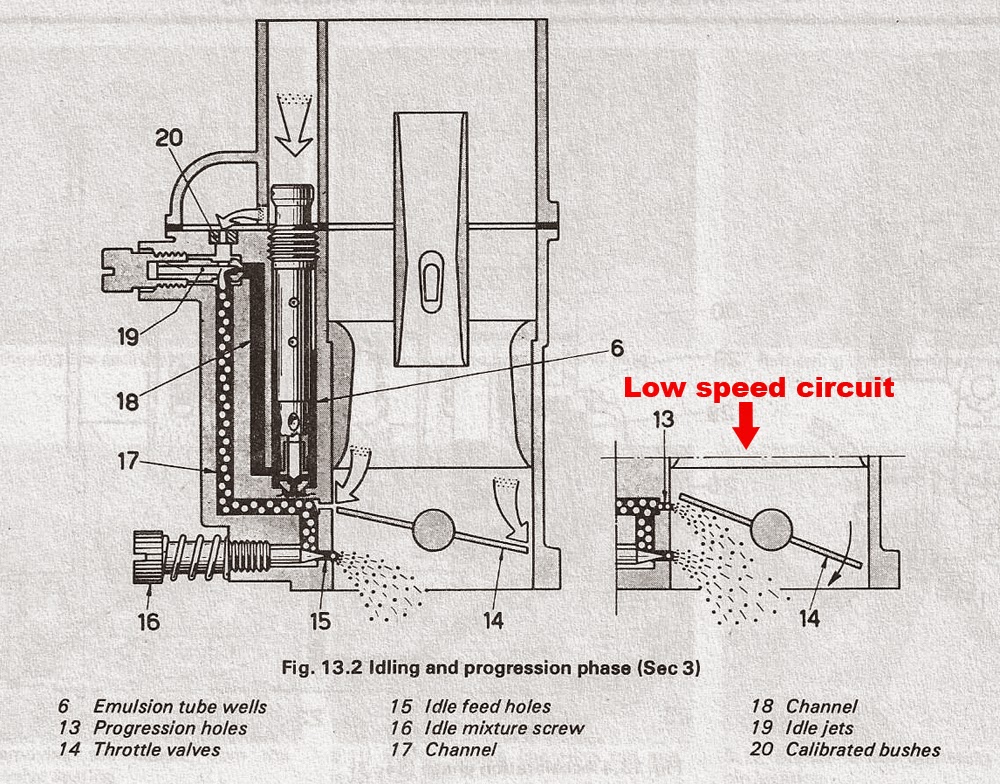 At idle air is flowing through the main throat of the carburettor and its flow to the engine is regulated by the throttle valve #14 (or plate as it is often known). The movement of the throttle plate is controlled by the position of the accelerator pedal and its closed position is controlled by the idle speed screw. When properly set, at idle, the throttle plate is opened just enough to allow air to mix with the fuel metered by the idle mixture screw #15 but not open so much that the progression holes #13 are exposed.

The operation of the engine from idle to approx. 3000rpm is controlled by the LSC whose only source of fuel is the IDLE JET. As such the idle jet controls the flow of fuel to the engine up to about 3000rpm (when the main circuit kicks in; to be discussed later).

With this understanding of how the LSC works and where the engine gets its fuel from in the range of idle to 3000rpm, you can now see how very important the idle jet is and why it is often overlooked as the source of problems when trying to get the low speed running properly calibrated.

Dino owners will often talk about having a low speed stumble, or backfire when pulling away or when the engine is operating at or below 3000 rpm and these issues are almost always approached with corrective measures involving the idle speed screws and the idle mixture screws. This is WRONG. Idle mixture screws and idle speed screws are for idle only. If you have a low speed running problem at engine speeds under 3000 rpm,  your problem is the idle jets.

We'll discuss this and jet selection in greater detail later once the high speed circuit and the potency of modern fuels is explained in our next two posts.