Having established what the various adjustments on the carburetor do, amassed the tools required to do the job, and prepared your car for its tune we can finally get to the fun stuff which is adjusting the carbs.

We will assume that we are dealing with a car that is totally out of adjustment or carbs that have been freshly re-built. As such we will need some baseline settings that allow you a point from which to start your tune. That said the starting settings should be as follows:

Air bypass screws - Set totally closed an all carbs. Note that these are taper needle seats that only require a light tightening when they bottom out. Be careful not to over-tighten them. Once they are tight be sure to re-set their locking nuts.

Idle mixture adjustment screws - Two full turns open from the closed position. Again these have tapered seats so no need to close them tightly. If you have spent time reading the blog, getting your tools in order, or just doing your pre-tuning prep, bear in mind that your car will have cooled considerably. At this stage re-start the engine and let the car come up to operating temperature.

While the engine is warming up you can practice using your synchrometer to get a feel for how it works. Try placing it in the throat of one carburetor and mentally note what number it reads. Now move it to the other throat of the SAME carburetor. If you are lucky the numbers may read the same but more likely they will be a little different. We'll equalize these later.

Having played with one carb repeat the steps on the other carbs noting the differences from carb to carb and between throats of the same carb. Making all of these equal will be the task we are faced with and knowing what affects what will make it seem all very simple by the end. Now on to setting the idle speed.

There are 2 schools of thought as to how to set the idle:

1. Remove the arm that connects the throttle linkages and set the idle using the individual speed screw on each carb. Once this is done fit the arm back to the carbs ensuring that it slides on without changing any of the settings.

2. Set the idle using only the speed screw on one carb and the linkage installed. This is the method outlined in the owners manual and the one we will go by in this tutorial. I prefer this method because it utilizes the throttle linkages which is how the final assembly is anyways.

In order to use the 2nd method you use the idle speed screw on the #3 carburetor (the one furthest from the distributor) and adjust the position of the mounting blocks on the connecting arm on carbs #1 & #2 in order to get all of the throttle plates opening the same amount at idle. 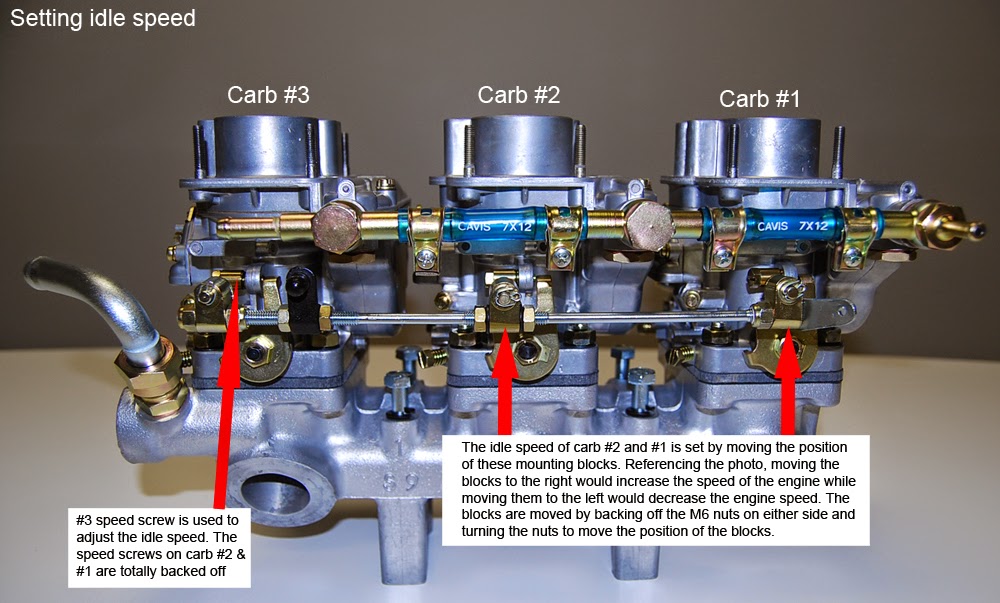 This may sound confusing but it is really easy when you wrap your head around the mechanics of what is happening. At idle we will measure the throttle plate opening is using your carb synchrometer referenced to the engine speed measured on your tachometer.

1. With the engine up to temperature and idling back off the idle speed screws on the #1 & #2 carb so that they are no longer touching the throttle assemblies.

2. Using the speed screw on the #3 carb turn it so that the engine holds an idle of about 900 rpm

3. Using your synchrometer note the readings on both throats of each of the 3 carbs. The values will differ from carb to carb and between throats of the same carb. You are interested in the HIGHER value recorded per carb regardless of which of the two throats it comes from. In other words you will have three pairs of numbers (values of two throats per carb x 3 carbs) and you are interested in the higher number that each carb (NOT the outright 3 highest numbers) produces regardless of which throat generates that number. Hopefully that is clear.

The final goal is to achieve an idle speed of 900 rpm while matching the HIGHER throat to throat value from carb to carb. At this stage this is achieved ONLY via a combination of the speed screw on carb #3 & the blocks on the linkage of carbs #1 & #2.

You are not after a particular number on your synchrometer but to have a value where each carb has at least one throat that reads the same number as one throat on the other two carbs.

This will require some detailed adjusting of the #3 carb speed screw and linkage blocks of the #1 & #2 carbs. Achieving equal numbers on at least one throat of each of the 3 carbs while maintaining an idle speed close to 900 rpm does not take very long provided you follow a methodical approach. After achieving three equal readings, be sure to accelerate the engine a few times by hand allowing the throttle mechanism to cycle and check your work. This step is complete once the engine holds a steady idle near 900 rpm while having one throat of each carb equal to or 'synched' to the other carbs. 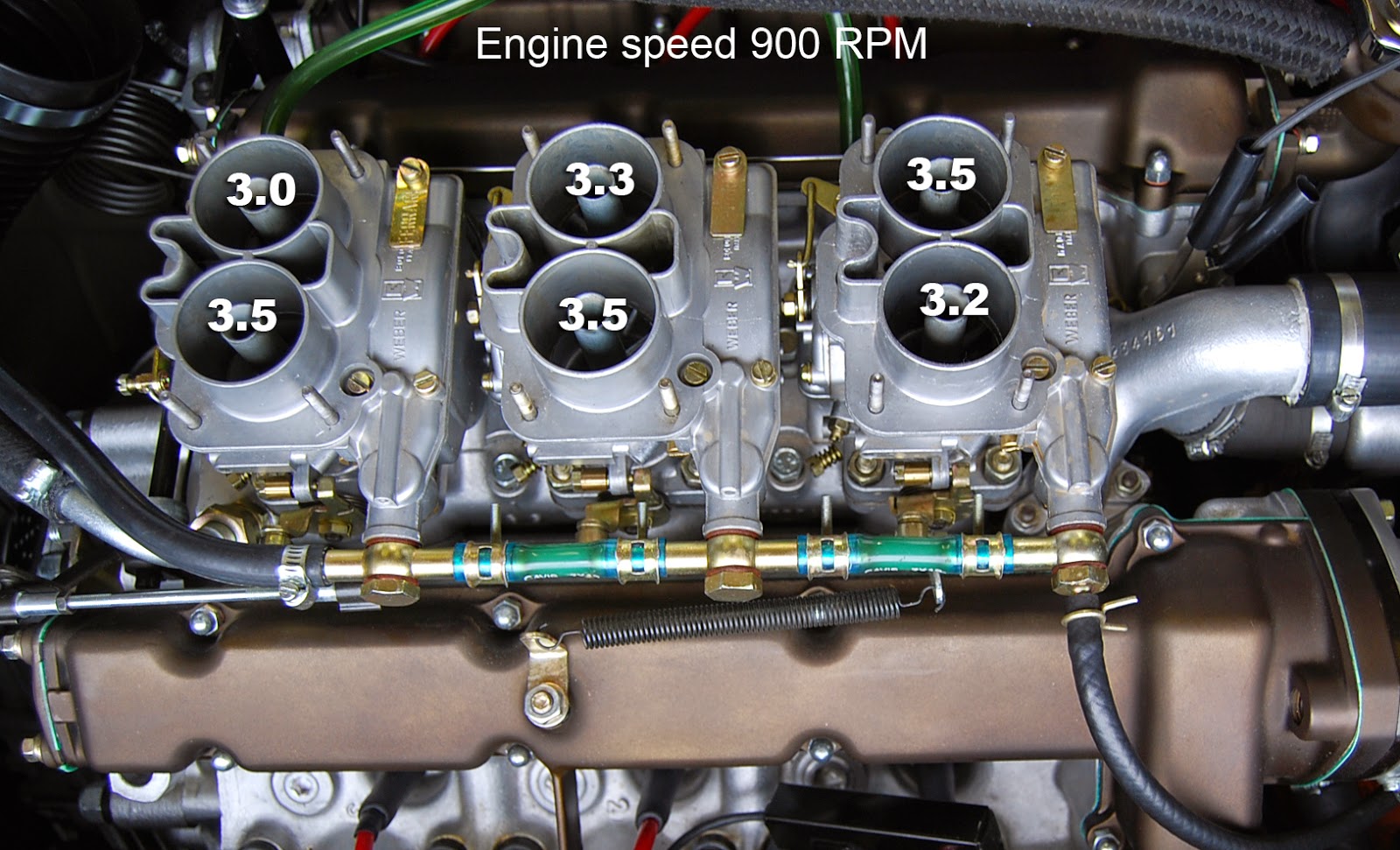 Synching the throats with the air correctors

If you remember our lessons so far then we know that (when properly set) at least one air corrector on each carb is left closed. Like their name implies, the air corrector 'corrects' for differences in airflow between the two throats of a single carb.

At this stage we have one throat of each carb equal to at least one throat of the other two carbs. Lets call this value the SYNCH NUMBER. Also (if we followed the procedure), the other throat will have a number EQUAL TO or LOWER than the synch number. Unscrewing the air corrector on the 'low' side allows us to RAISE the value up to the synch number ensuring that both throats on the carb flow the same.

The photo below illustrates a hypothetical synch number of 3.5 and the green arrows show the throats that require their air correctors opened in order to achieve a value of 3.5 on all 6 throats. 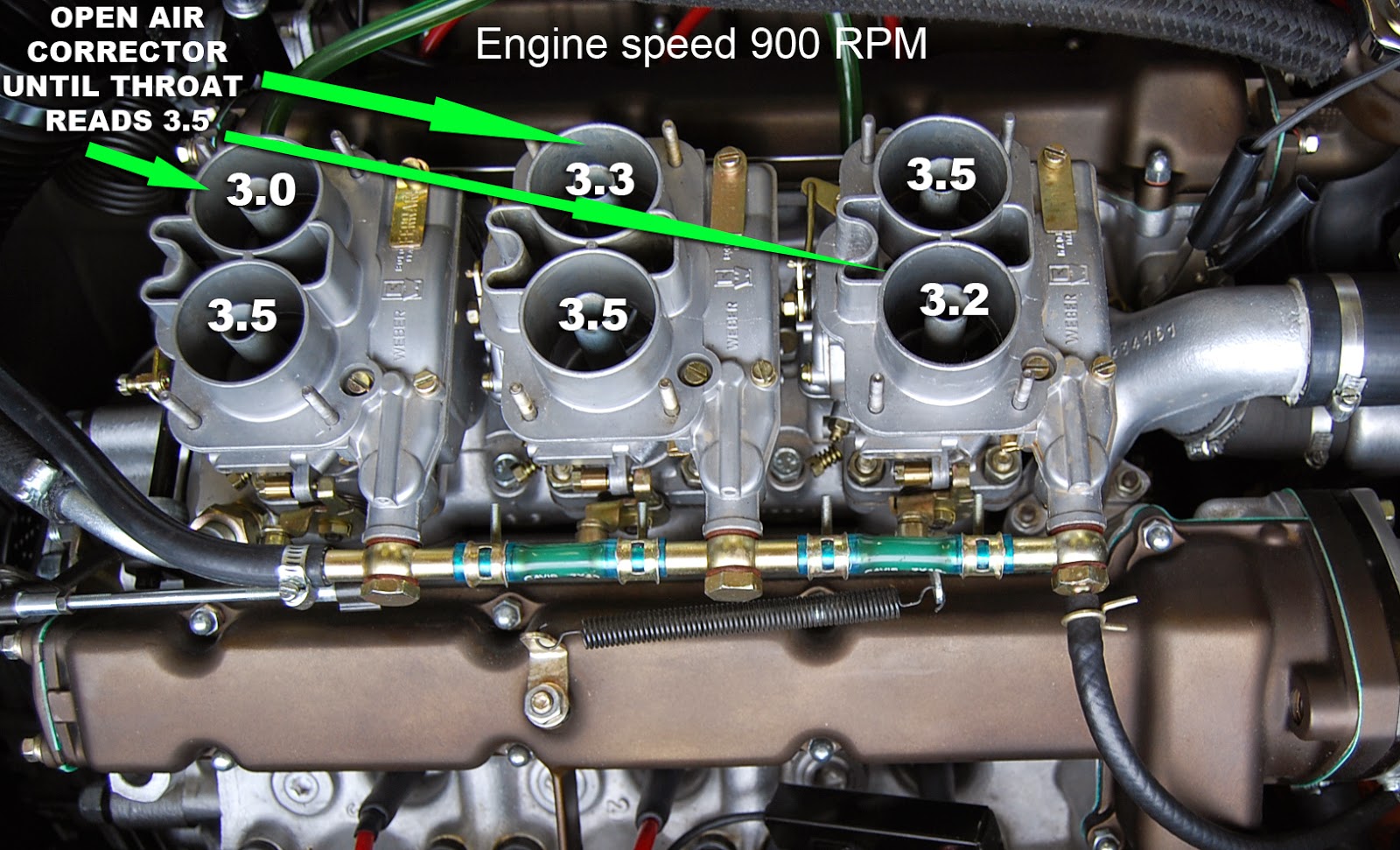 To do this work only on the air corrector that is on the low reading throat. Here are the steps:

1. With the engine idling determine which throat on a particular carb reads your synch number.

2. Now take a reading on the opposite throat of the same carb. If the number is the same you are finished and can move on to the next carb.The number will otherwise be lower on this throat so you need to loosen the lock nut on the air corrector of that throat and unscrew the air corrector until you achieve a reading equal to the synch number.

3. When you have achieved a matching number be sure to fix the air corrector in place by tightening down the lock nut.

4. Repeat the procedure to the other two carbs.

Once this is done, your synchrometer should read an equal number on all 6 throats. 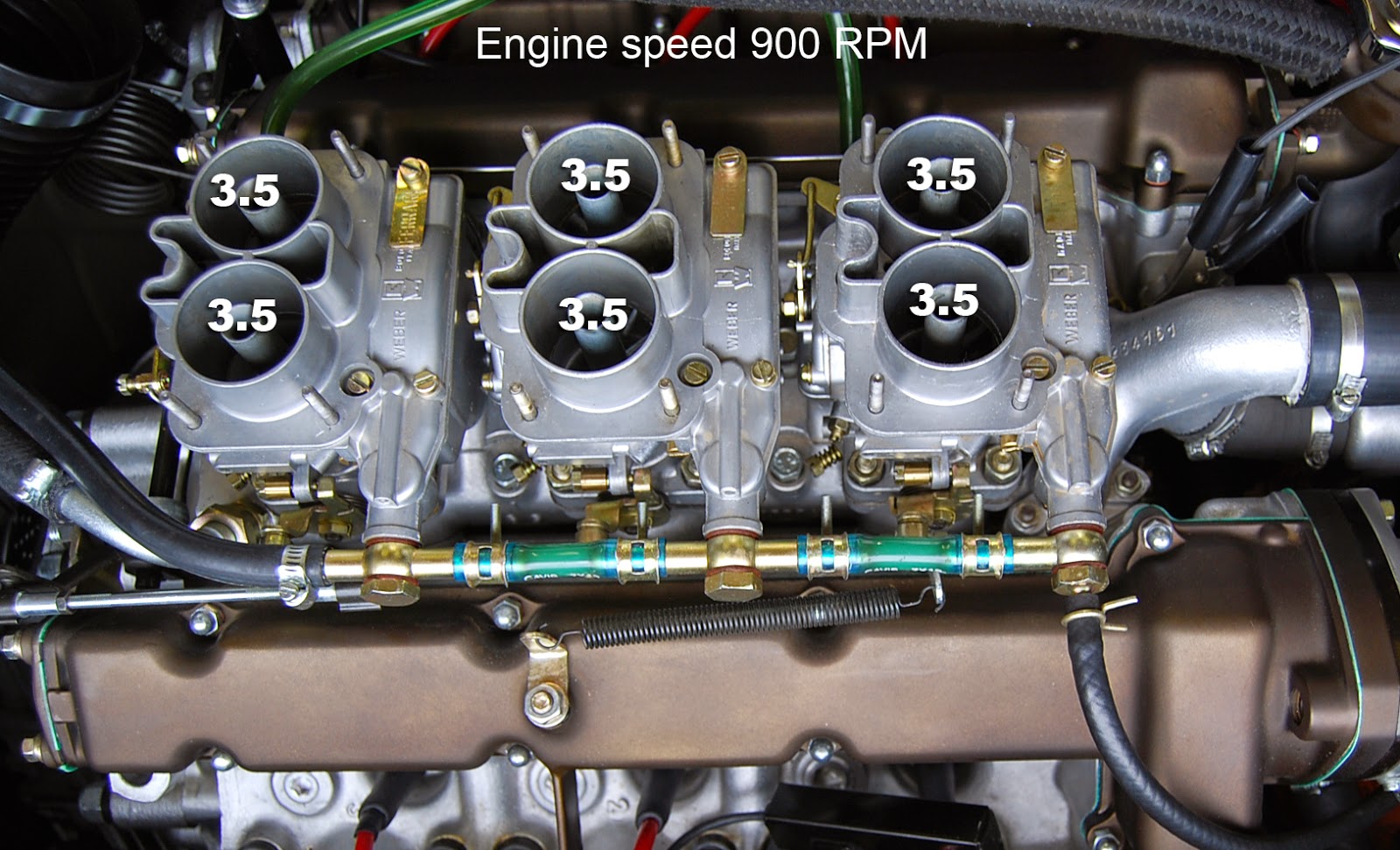 At this stage you now have your idle speed set and all three carbs are properly synchronized. It may seem like a lot when you put it in writing but in reality this entire procedure can be carried out in much less than 30 minutes.

One final step is to turn the idle speed screws on Carb #1 and Carb #2 to the point where they 'just' touch the throttle mechanism. Again a piece of paper can be used between the tip of the screw and the mechanism to be sure of the point of contact. Be careful to ensure that the speed screw does not alter your synchrometer numbers in any way. If your numbers change it is because the speed screw is turned in too much and needs to be backed off a hair.

The next step (and subject of our next blog posting) will be setting the idle mixture screws which will conclude the basic setting up of the carburetors.